skip to main | skip to sidebar

First time I have been to Phantom since March, mostly because of the HEAT.  I had the chance for a cabin in August, but met with strong resistance from the other half.  Anyhow, I went down at 6 AM and took plenty of water so I could sit in the shade on the way down.  I knew that I could not check into the room until about 11:30, so why wait down there?
At Cedar a runner told me all he carries is Gu.  He said that the body only needs water to digest food, therefore without food, no one needs water.  Also, he never sweats while hiking the Canyon.  Perhaps because as soon as sweat hits the skin it EVAPORATES?
A new sign at Tim's Hut.  It appears as though one can now access the rainwater collected in the cisterns, which would be nice to wet down a shirt or some such.  However it must be a bit manky after sitting in the sun.

At The Big Shade ran into Rachael, who told me the Z's love my legos and the books I send them.  She said she and Brian talk about me all the time, and I suggested it was every time they stepped on a Lego.
Once at the Ranch, there was a long line of rim to rim runners waiting for lemonade.  No beer sold, because their liquor license does not allow carry aways.  But no one was 6 feet apart. So I put my sticks akimbo, and people just stepped over them, saying, "ExCUSE me".  I said, "SIX feet". They would buy post cards and then stand there writing them so they did not have to stand in line again, and one kid wanted the wifi password and would not take no for an answer.  "I have to let my mother know I made it to the bottom safely."  Kid, she needs to know when you make it to the TOP safely.
Showers from 12-2 and 2-4 only so they can clean the showers in between, and we are to spray down with disinfectant before and after. I got in as soon as they unlocked so the showers would be nice and clean.  Dinners served in a big bag with the name on it and taken back to the cabin to eat, or at one of the tables in front.  The trash is given back, 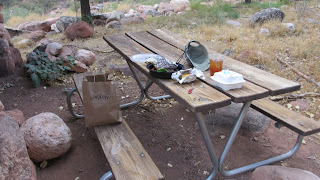 On the way out I thought I saw someone carrying a bagpipe.  Turned out to be a kayak paddle. which made much more sense.  There were so many hikers I put on my face shield as well as my mask, and when I stepped aside for a couple who were obviously not going to step aside for me, the lady said, in a sugar sweet voice usually reserved for three-year olds: "Oh, look, she has on a face shield".  I guess the Pandemic is over.
One of my extra water bottles started leaking through the lid, so I hiked out with a wet butt.  I guess as a cooling system, it works better than relying on Gu.
Posted by Slim at 10:08 AM No comments:

I have been watching an agave on the Hermit Trail waiting for it to bloom.  Since our acting Super opened the trails to locals, I scampered down to get a picture.  Something ate it.  Some animal came along and ATE my agave.

It was a little spooky hiking down the Hermit all alone.  It is a rough enough trail that I was a wee bit nervous about turning an ankle all by my lonesome.  Then I explored the site at the trail junction looking for somewhere that they straightened arrows.  I saw a picture of this somewhere.  Anyhow, I found an old cowboy camp and some more walls, but no rock.  THEN I started thinking that since I was off trail, I might meet a rattler and then what would happen?

On the way out I met two locals, and then two rangers, so I guess my broken body would not have been lying on the trail for too long before someone tripped over me. 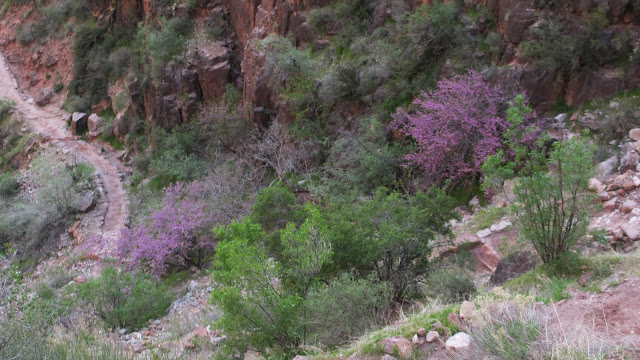 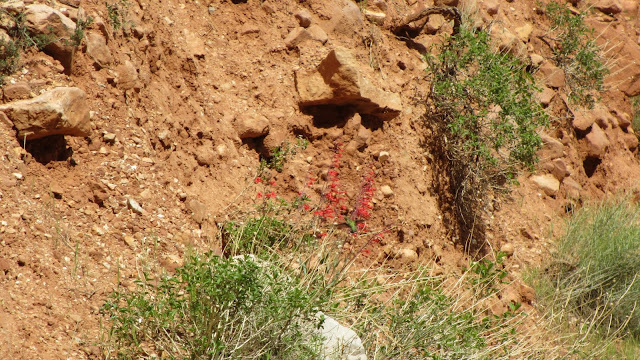 We went into lockdown three weeks ago.  We could walk and ride bikes on the rim, but not below.  On the 15th, the acting super said locals can hike all the trails except Bass, because you have to cross the Supai Rez, and they are still closed, Marble Canyon, and the North Rim.  So we ran down to see the Redbuds.

Note to self:  mid March is too early.  Only a few trees had started.  Mid April is too late.  Most of the trees had lost their blossoms and started to leaf out.  The three just below the Redwall were perfect.
In March we met 300 people on this hike.  Today we saw four locals and one ranger. 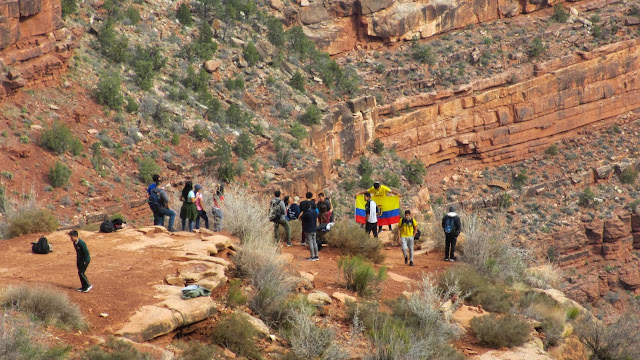 Summer 2019.  It is said that the best way to spend money is on experiences rather than things, so we signed on with a commercial river trip and a commercial bike trip.  Let your guides do the planning, and the shuttle, and the cooking, and the cleaning.

First a week on the Yampa with OARS.  Dan, John, Izzy, Robin, and the geologist, Elliot.  We had been with Elliot two years prior.  There was another geology trip a few days ahead of ours with Wayne Ranney.  That would have been tempting, had I known, but his trip was full, full (25) and ours only had 14, which was more manageable.

The river was high, 20,000 CFS, which level we have not seen the Colorado through the grand in a long time.  I rode through all the rapids with a minimum of whimpering.  One of the peeps told us his river name is Juanito.  I told him my river name is “cringes in the bottom of the boat and screams like a girl”.

One gentleman told me he wanted to go with Wayne, but the trip was full.  “Do you know Wayne?”  “Yes, I work with Wayne.”  Silence.

“When I was at the GC guide training seminar, do you know GTS?”
“Yes, I often present at GTS”.  Silence.

“When I was at the GC history symposium, do you know the history symposium?”  “Yes, I am on the board, and I was in charge of the tours for the symposium.”  Silence.  I guess the proper response would have been, “Gosh, no, tell me more.”

One day Holiday crowded us a bit.  They beat us to the Mantle Cave, so we climbed up some slick rock to another cave. Then their six boats took up the whole beach at the scout for Warm Springs, and we barely got onto the beach.  Then a private trip showed up and there was no room for them at all.

We could not hike up to Wagon Wheel because it was afternoon when we got there.  Well, Brad and I could have, but one older guy was determined to go, and I am sure John did not want him up there in the heat of the day, so he cut the hike short.  If we had asked to go by ourselves, it would have put John in the position of saying, “Yes, the two of you can go, but not him”, and that would have been awkward for John.

Brad was in the Ducky day four and got washed into the creek.  They picked him up right away, but lost the ducky. (We got it back when another OARS group downstream sent their paddleboat to fetch it).  A young man was also washed out, but was wearing a “guide” PDF instead of a class III, and was recalculated through the eddy for quite a ride.  Dan had to run upstream and grab him with a throw bag, because our boat could not break the eddy fence.  Kept the ducky, lost the paddle.  So we lost enough time that we could not hike up Jones Hole.

Took an extra day in Vernal to visit Dinosaur and take a walk with a ranger who has degrees in geology and anthropology.  Then went out to a private ranch with some impressive rock art.  I am glad they chose to protect it, but what happens if the kids don’t want the land anymore?

Down to Moab for the bike trip with Western Spirit.  Sean, Liz, and Willie. By far the most professional guides we have been with yet.  On any trip.  Stopped by the Edge of the Cedars, which is a collection of pothunter goodies which were seized in raids.  So most of the pieces said, “provenience unknown”.  Depressing.  Recognized some names from families at the school.  Hmm.

Then we rode through the reduced Bears Ears national monument.  I immediately wrote to my congresspersons again to complain about this land being withdrawn from protection and handed over to a CANADIAN uranium mining firm.  I rode up all the hills, and down all but one.

Two years ago we were on a WS trip when they built huge bonfires every night, even in the State campground where the signs specifically said no wood longer than 2 feet.  They were tearing down whole trees to set on fire.  As the High Priestess of Leave no Trace, I wrote a pretty stern note to WS, and they answered that the guides did not want big fires, but one of the kids on the trip kept bringing in trees.  I told them, one, that was disingenuous, and two, as guides we do not allow people to do anything they want just because it would be fun.

On this trip we brought our own wood, and dismantled the fire rings.  A result of my complaints?  I would like to think so.  I wrote them a nice letter this time.  See, I can be polite.

Then to Canyons of the Ancients, which we had never heard of until a friend moved up there to be superintendent.  A lot of little side canyons around Cortez with the highest concentration of sites anywhere.  Lots of hikes, lots of unexcavated sites, and lots of ways to get lost, since most of the trailheads are not even marked.

Mesa Verde then to tour Long House and Balcony House.  The Long House tour was the best I have ever been on.  The ranger had a double masters degree in Cultural Anthropology and History, and was able to answer all my questions.

I recently had a discussion with a friend who claims that rangers don't really need degrees.  Their time would be better spent just learning about the park they are in.  But going on a tour with a highly, some would say over, educated ranger makes all the difference.  At least to someone, like me, who has some background knowledge and wants to get deeper into things.

Since we were so far north, we spent two days in Chaco.  Hiked to the Jackson steps (7 miles) and the supernova pictograph (6 miles).

So the first three weeks are done.  Next up, North Rim, Bryce and Zion.